The Awards Just Keep Rolling in for Marketing RELEVANCE! 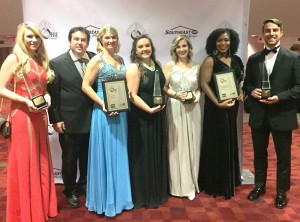 I’m feeling a little like a member of U2 at the Grammys, and it’s a pretty good feeling (U2 has received the most awards of any group in history, with a total of 22 Grammy Awards). The past few months have included one awards program after another, with Marketing RELEVANCE taking home a multitude of prestigious recognitions, and I couldn’t be prouder to work with the talented and dedicated team at Marketing RELEVANCE.

It started in September with the STARS Awards, presented by the North Carolina Home Builders Association during the 21st Century Building Expo and Conference in Charlotte, North Carolina, where Marketing RELEVANCE received the Best Advertisement – Associate award for an ad we designed as part of the His, Hers & Ours campaign for Carolina-based home builder Essex Homes. The award-winning ad featured striking art advertising the builder’s design incentive, and resulted in an astonishing 76 new home sales in just two months. STARS Awards honor the achievements of builders, associates, Realtors, media, advertising professionals and many others who make major contributions to the residential homebuilding industry.

Then, in November, we were honored again with two awards at the Public Relations Society of America (PRSA) Georgia Chapter’s Phoenix Awards Celebration. The Phoenix Awards recognizes projects and programs that demonstrate excellence in the public relations profession in Georgia. Marketing RELEVANCE received a Phoenix award for the “Twice as Nice” tax promotion social media campaign, also for Essex Homes, which helped the builder sell a total of 68 homes in the month of March 2015 (which became the division’s highest ever sales month) and lead the Columbia market in building permits for the first quarter of the year. We received a second social media Award of Excellence for our work on Keystone Custom Homes, “Say ‘I Do’ to Your New Home” campaign, which resulted in a 20 percent increase in the builder’s social media traffic and garnered national attention in both print and online.Then, just a few days later, Marketing RELEVANCE took home nine OBIE Awards at the Greater Atlanta Home Builders Association’s 35th annual OBIE Awards. We received five Gold and four Silver awards, the most ever received in one year in our company’s history. OBIE Awards are the premier awards given in the Atlanta new home construction industry for marketing, sales, building and remodeling. The OBIE wins included:

We also just learned that we are a Silver Award Winner in the National Association of Home Builders’ National Sales and Marketing Council’s The Nationals Award. The Silver Award is for the work that we did in the past year on the FrontDoor Communities Website. Silver Award Winners are the top vote recipients in their category and are the finalists for the Gold Award, which will be announced and presented January 19th in Las Vegas at the International Builders’ Show. In its 36th year, The Nationals salutes and honors the best in the building industry for their determination, integrity, creativity and endurance. It is the nation’s largest competition for sales and marketing professionals and communities.

Again, I am incredibly proud of our team’s dedication, commitment and hard work creating strategic marketing programs that produce serious return on investment for our clients. The recognition that we receive from these awards programs is just the icing on the cake.

If you’re searching for an exciting way to drive leads and increase sales, visit www.MarketingRELEVANCE.com to learn how we do things at Marketing RELEVANCE, and contact me directly at 847.259.7312 x230.